When can you be a small taxpayer again?

Before the 20th of June 2017, the law said that if the KATA taxpayer got out of this taxation form, then the taxpayer was not allowed to choose this form again in the year of termination, and the next 12 months thereafter. Due to the fact that the Tax Authority did not accept the change notification.

Most of us could not interpret this rule until we met a particular case. So we faced with the practical meaning of the law when we received a notification from the Tax Authority that we could not be a small taxpayer yet, because the deadline had not expired.

Let us look at example:

If the small taxpayer status of a business organization ceased to exist in 2016, we may have thought that we might operate again as a small taxpayer from the 1st of January 2018. Unfortunately, this was not the case, because according to the law, we only had the opportunity to choose in January 2018, which is effective from the following month (from February).

According to the new rule:

On the 20th of June 2017 the new law amended this rule. Thanks to the new regulation, which was likely to be the original intention, a small taxpayer who ceased to exist in 2017 can be a small taxpayer again in January 2019. 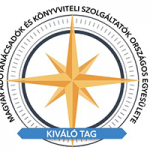